“The knitting needle is mightier than the sword.”

I saw that quote posted by Marc Hedlund on Twitter following the massive womens’ marches which happened around the world on Saturday.

This is a photo, courtesy of the Voice of America, of a sea of demonstrators in knitted “pussy hats” in Washington, D.C. 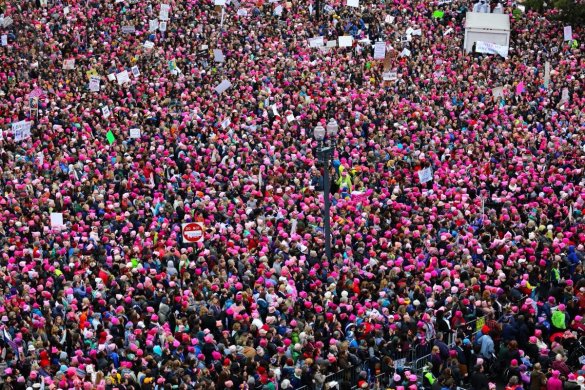 Who would have thought, in the very digital year of 2017, that the analog activity of knitting would be a such of public act of democracy in action?

The Pussy Hat Project was started by Jayna Zweiman and Krista Suh, shown here in this photo by Lucy Nicholson of Reuters. You can find out more about the project, and how to knit one for yourself,  at www.pussyhatproject.com 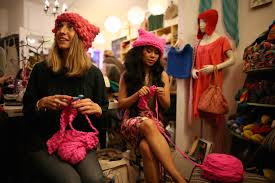 Here are some of my favourite photos of Saturday’s events.

Erin, a friend and dedicated knitter in Toronto, knit her hat and two others for friends. She says this was “Perhaps the most powerful, meaningful knitting experience so far.”

This is a Washington, D.C. police officer, photo courtesy of JMBrinton on Twitter.

How could you not have a smile wearing a bright pink, cozy, knitted hat?

The hats really pop in a crowd, as shown in this photo by Shannon Stapleton of Reuters.

It makes me feel proud to be a knitter.

The events of the past few days have also reminded me of words Canadian politician Jack Layton wrote in an open letter to Canadians shortly before he passed away in 2011.